A model image of the Narrow Water Bridge when open. 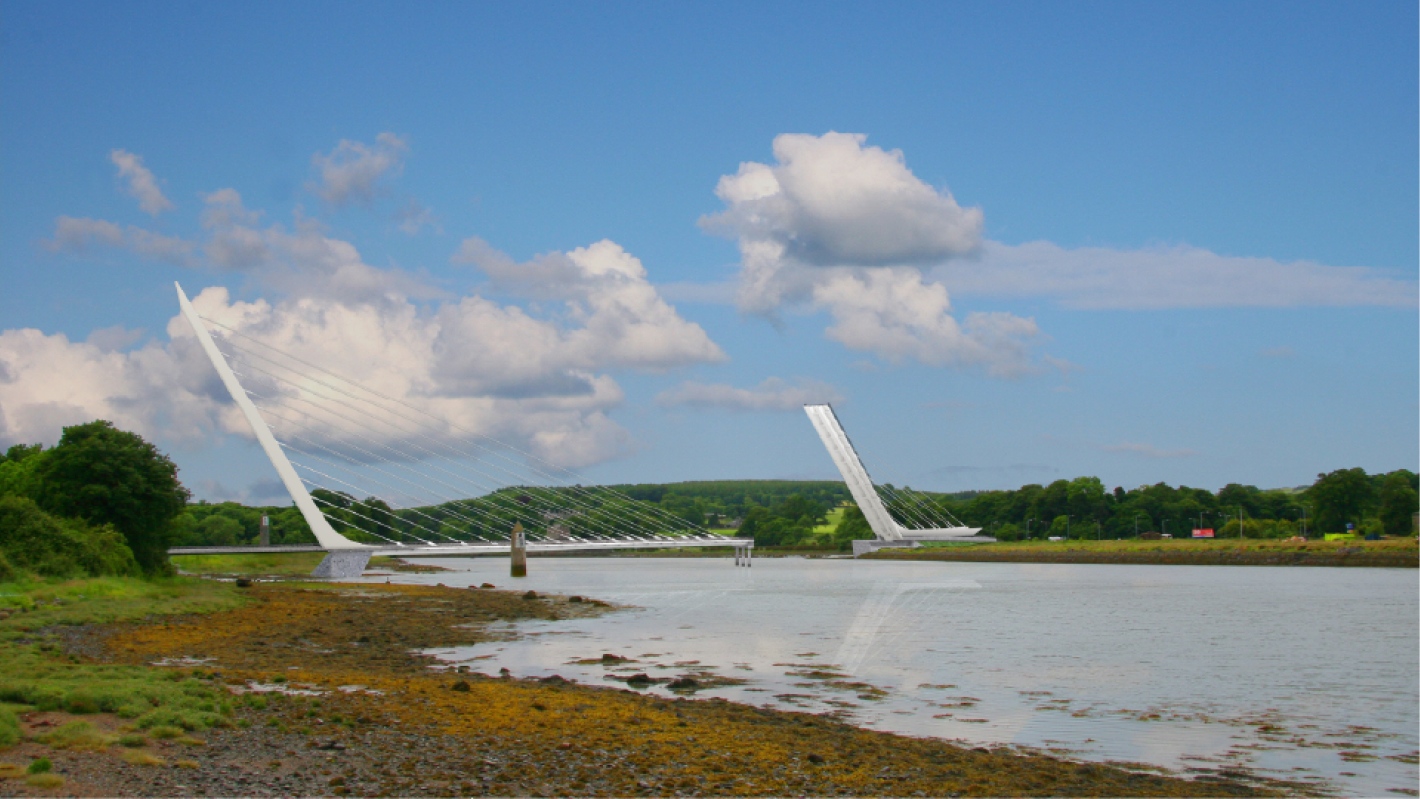 On 18th November 2022, the Government announced the commencement of the tender process for the Narrow Water Bridge, a major cross-border infrastructure project linking the Mourne Mountains in Co. Down and the Cooley Peninsula in Co. Louth. The bridge project is a long-standing and highly symbolic government commitment, which will improve access, strengthen North-South links and deepen connections between communities on both sides of the border. €3m in funding has been secured from the Shared Ireland Fund to see the project through the tender stage.

The bridge will cross the Newry River approximately 400m south of Narrow Water Keep at the A2 road roundabout, connecting the R173 Omeath Road south of Ferry Hill and the A2 dual carriageway. The bridge comprises a 6.0m wide single carriageway and a 3.0m wide pedestrian and cycle facility to either side of the carriageway. A new roundabout will be constructed at the junction with the R173 Omeath Road and the existing A2 roundabout will be upgraded. The total length of the scheme, including the bridge crossing, is approximately 660m.

Due to the navigational requirements along the river for accessing Victoria Lock and the Albert Basin, the northern span of the bridge will be an opening movable span providing, when opened, an unlimited vertical clearance for a 20m wide navigational channel.

Visiting the site of the proposed bridge, former Taoiseach (now Tánaiste) Micheál Martin underscored the significant tourism and economic benefits the project will bring to the region. He said: “Along with improving North-South connectivity, the bridge will be at the heart of a range of cross-border greenways, active travel, recreation and outdoor activity amenities planned for the Carlingford Lough area.”

The bridge itself is an iconic design, with a taller, longer fixed southern span supported by a south leaning pylon, and a second separate smaller, shorter northern span supported by twin pylons, which can open using a rolling bascule mechanism. The south fixed cable stayed span is 138m and northern cable stayed rolling bascule (opening) span is 57m. The asymmetry of the span is reflected in the pylon heights, with the higher pylon located on the southern side of the crossing. The lower twin pylons on the northern side support the opening span.

The cable-stays are small diameter stays comprised of parallel strands with multiple layers of corrosion protection. Stay anchorages connect the cables stays to the pylon and the orthotropic steel deck.  The south fixed pylon will be constructed from structural steel, consisting of an outer and inner steel skin which will be infilled with concrete ballast. Similarly, the steel pylons that support the bascule span will be infilled with concrete.

The south pylon and deck are fixed to the south abutment, forming an integral connection. The bridge will have a movement joint at the intermediate pier and at the north abutment, as required to allow the opening of the north bascule span and to accommodate bridge decks expansion and contraction.

The bridge will be remotely operated from a control building located on the southern approach, c.350m south of the navigable channel. The project also requires the construction of a new navigational beacon downstream of the proposed bridge, the installation of variable message signs (VMS) on the approaches, and the integration with the proposed Carlingford Lough Greenway.

ROD is leading the detailed design and management of the project. We are supported by Hardesty & Hanover on the moveable bridge and by OBFA Architects and JN & G Traynor & Partners on the control building. Having previously worked on the scheme between 2008 and 2013, we were delighted with the opportunity to support our client, Louth County Council, and the key project stakeholders reactivating the project to bring it to tender stage.

Learn more about the work of our bridges team