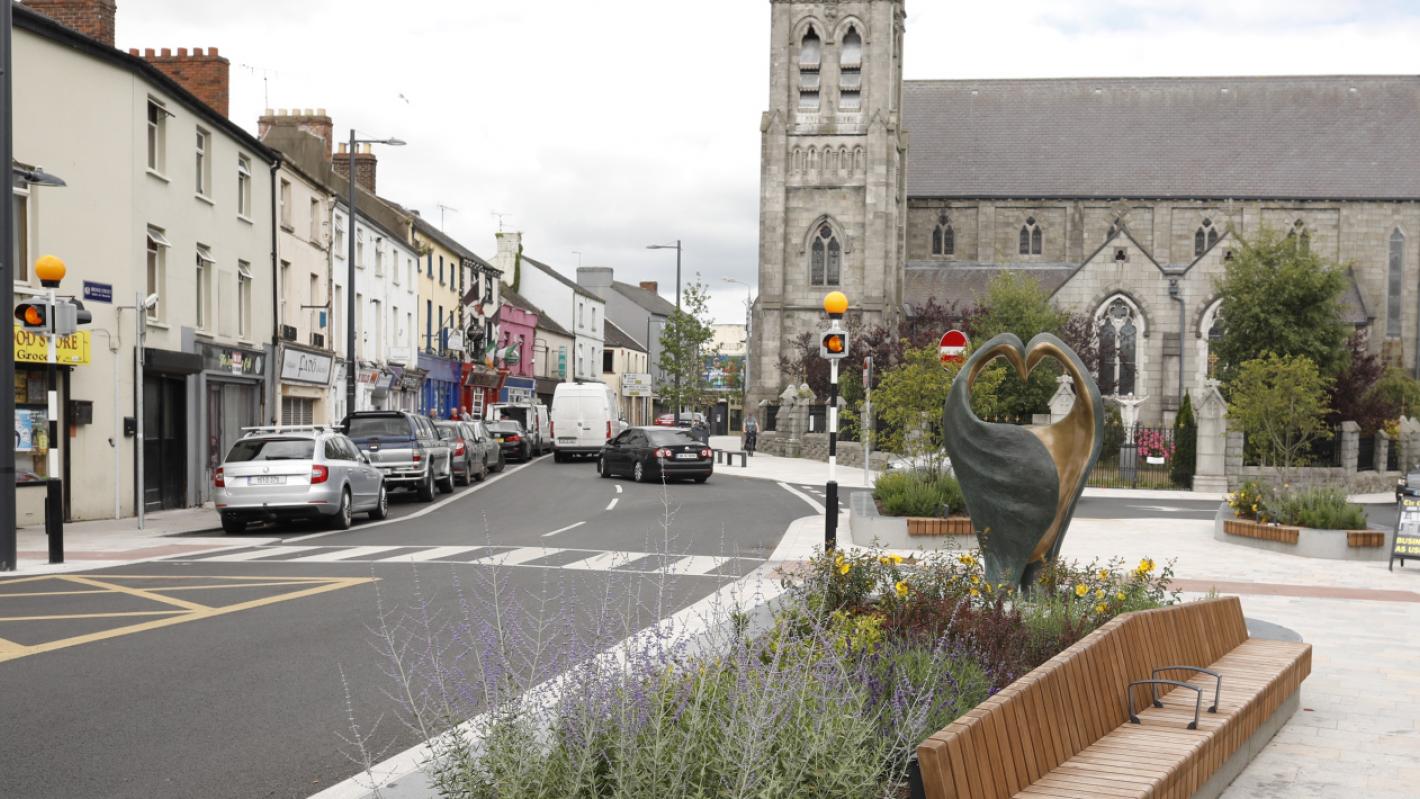 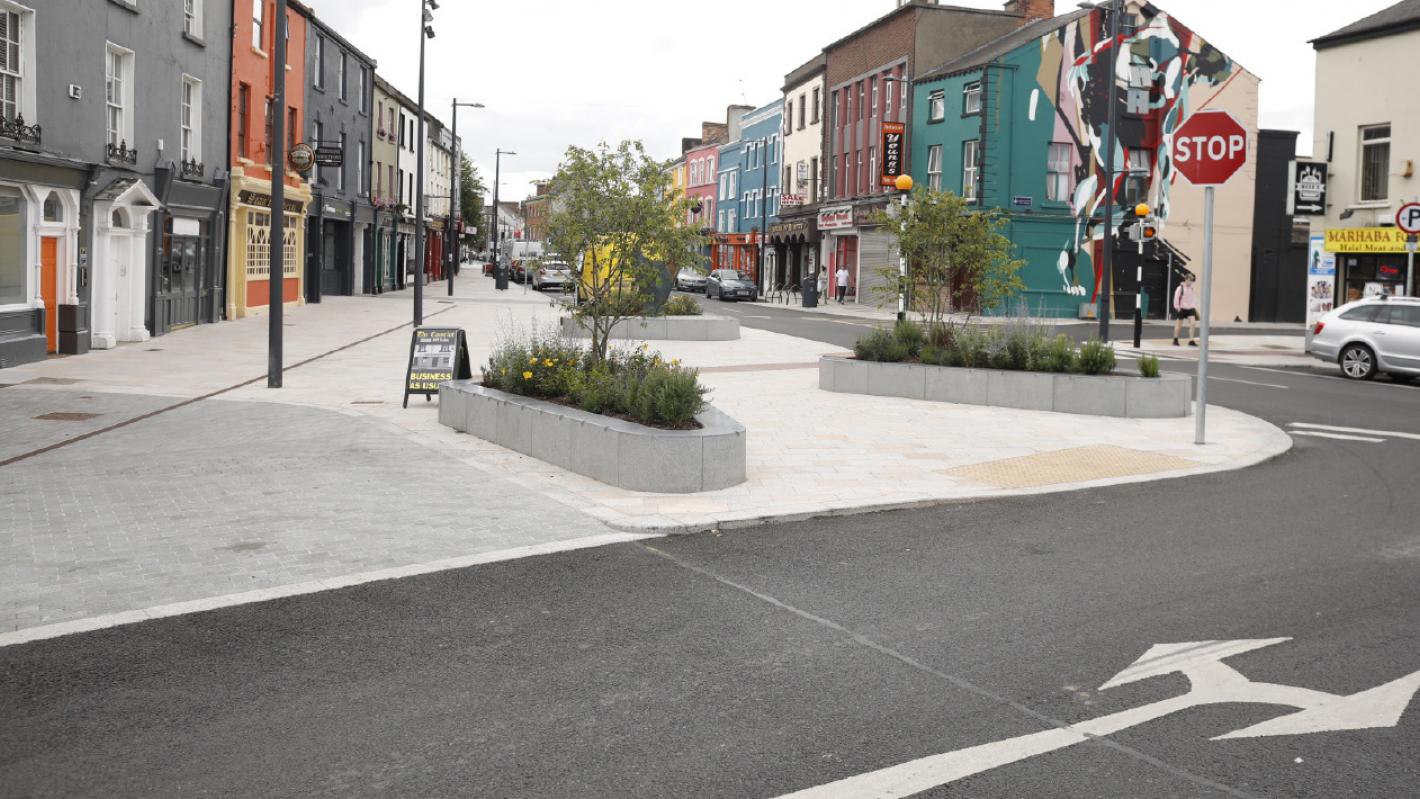 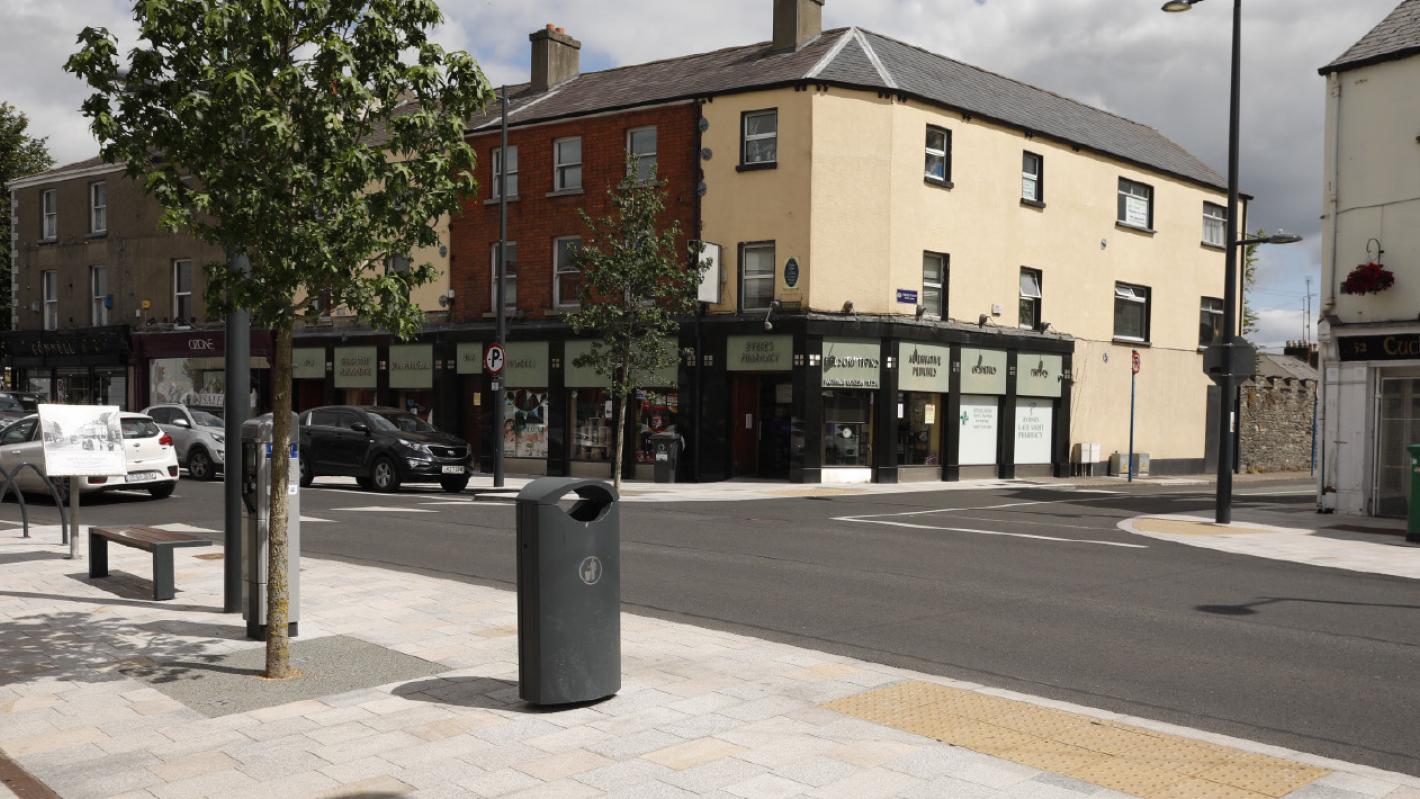 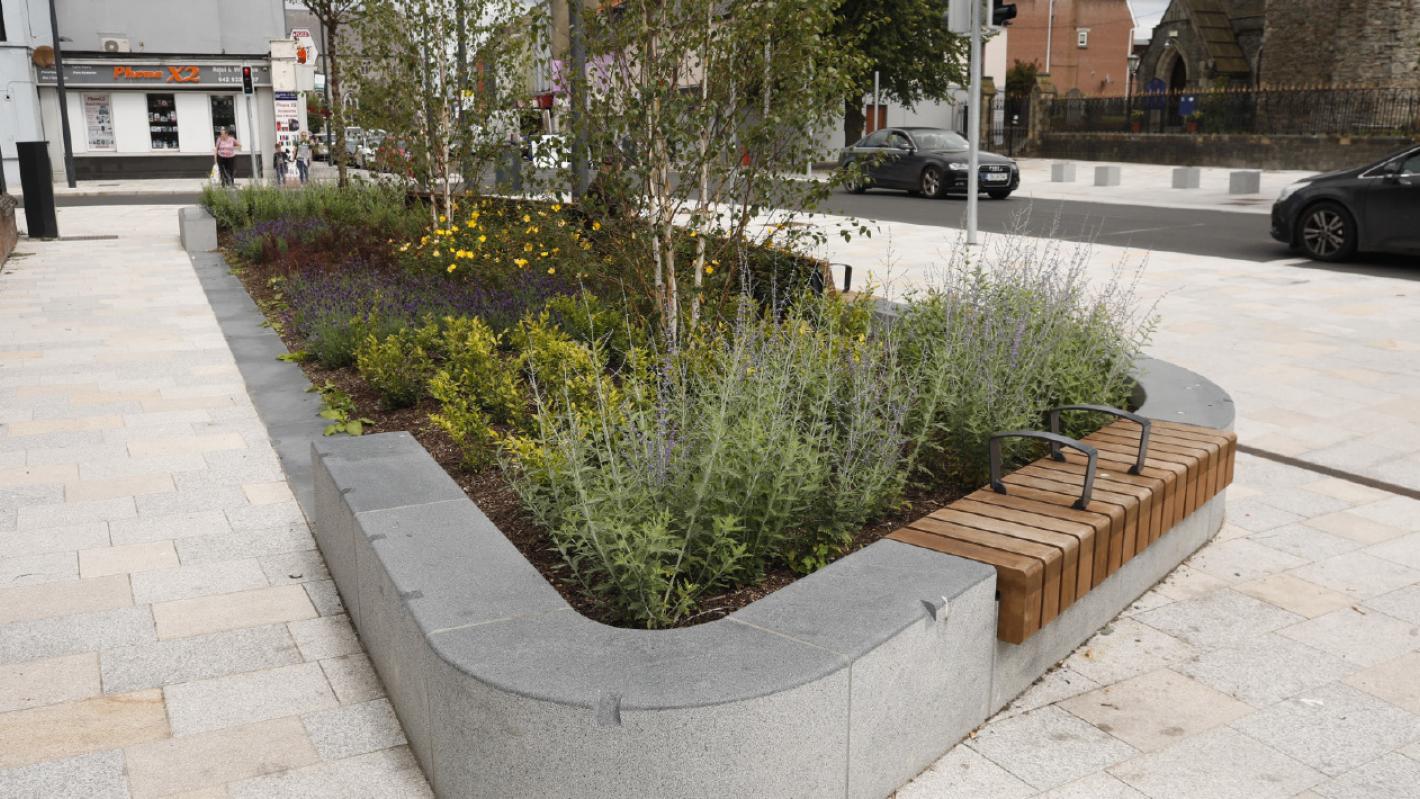 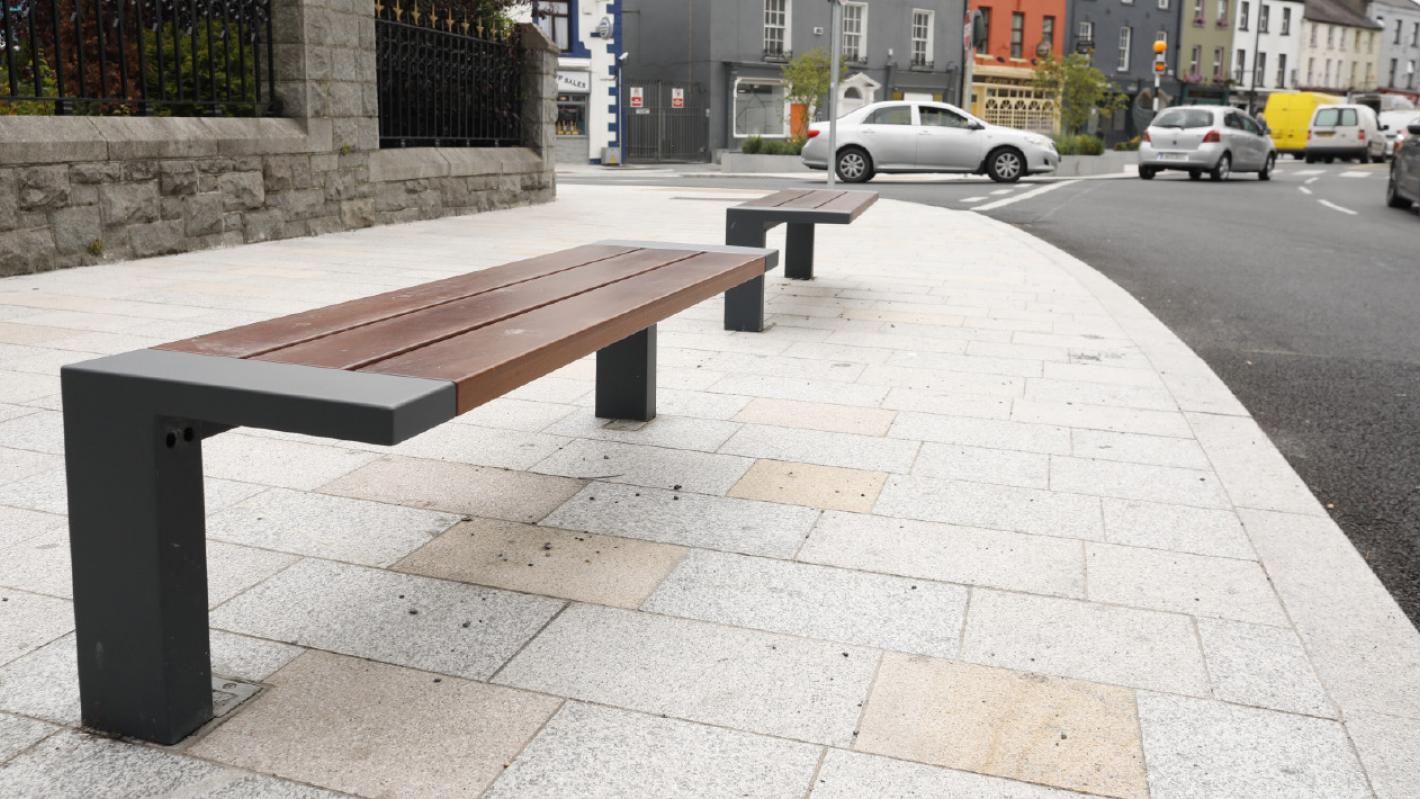 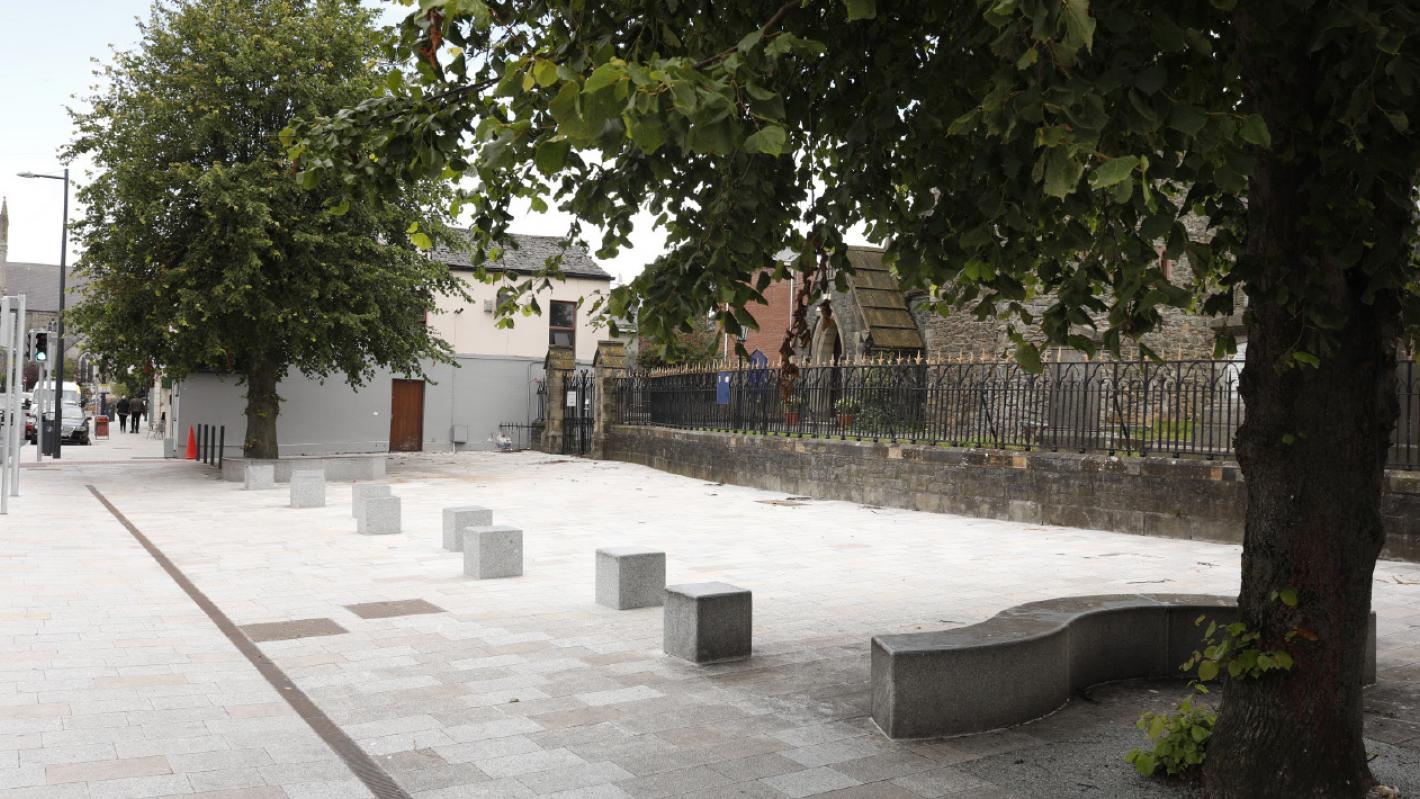 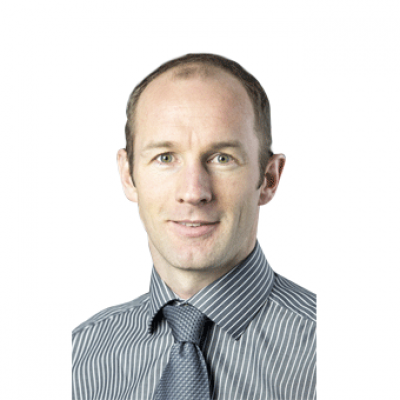 In 2018, Roughan & O’Donovan (ROD) was appointed as civil and structural consultant on the Clanbrassil Street and St. Nicholas Quarter rejuvenation scheme, with BDP as lead consultant.

Louth County Council wanted to build on the success of its Market Square regeneration project, completed in 2011, by revitalising the wider historic town centre of Dundalk, including Clanbrassil Street, Church Street, Linenhall Street and Bridge Street.

Clanbrassil Street once sat on the main route between Dublin and Belfast and had all the hallmarks of a space designed for large vehicles rather than people, including wide carriageways, a shortage of crossing points and an absence of outdoor space for social interaction. To breath life back into the town, our design team reimagined it as a place where, as the urbanist Jane Jacobs put it, the theatre of life can thrive.

Our approach was to reconfigure the town centre as a pedestrian-friendly public realm, with narrower carriageways, additional pedestrian crossings, wider footpaths, and new street lighting. The Church Street/Bridge Street/Linenhall Street junction was reconfigured to provide an open space in front of St. Nicholas' Church, with new seating and planting. A bronze sculpture, titled "Heart Space", by local artist, Breda Marron, was also installed.

The scheme was granted Part VIII planning in April 2018. Construction began in January 2019 and was substantially completed in March 2020. The works were undertaken by John Craddock Ltd.

The scheme was officially opened in September 2020.

This project powerfully demonstrates how good place making can transform a once hollowed out town centre into a living, breathing, sustainable public domain while also promoting the health and well-being of the local community - an important lesson, particularly in the wake of the COVID-19 pandemic.

The multidisciplinary team’s holistic approach to the design of the scheme enabled them to enhance the public realm without compromising the functionality of the street. The team carefully examined the street space and its use before rebalancing it to meet the needs of all in an equitable manner.

The design was developed in close consultation with stakeholders, community groups and interested parties, with valuable input from the elected members of Dundalk Municipal District and Dundalk Business Improvement District (BIDS). Their buy-in was essential to ensuring the project delivered on the needs of the street, both now and in the future.

The design team reduced the dominance of cars in the town by prioritising pedestrians and cyclists, enlarging pavements to support ease of access, improving pedestrian crossings, providing better parking facilities and signage, and introducing traffic calming features in line with the Design Manual for Urban Roads and Streets (DMURS). This not only reduced carbon emissions by promoting sustainable travel, making the town healthier, but also improved access to culture and entertainment, making the town more vibrant.

As the streetscape forming the focus of the scheme is an Architectural Conservation Area (ACA) with many protected structures, preserving this rich built heritage was an important consideration. By retaining the historic street layout, and enhancing the main assembly points at Market Square, at the convergence of Bridge Street and Linenhall Street, and at St Nicholas Church, the project gave the local community, not just a place to meet, sit and talk, but also a connection with their shared past.

The project team also recognised the importance of the town centre’s informal spaces, and enhanced the amount of vegetation and seasonal interest with 18 new trees, new shrubs and ornamental planting.

The aesthetic character of the town centre was further improved through the provision of high-quality granite paving materials, lighting columns and luminaries, public art, raised planters and a general decluttering of the streetscape, including the removal of overhead powerlines. This was achieved in an environmentally sustainable way through careful reuse of existing materials, such as granite kerbs and cobbles, and the retention and rehabilitation of road pavements. This cost-effective approach allowed for a greater portion of the budget to be spent on the future-proofing of utilities and on high-quality materials that will last the test of time.

Our main challenge was to rebalance the street space in favour of the pedestrian while also creating an enhanced public realm acceptable to all stakeholders. This involved narrowing the road carriageway as much as possible, retaining only necessary car parking and loading areas, and fully integrating them along the street edges. The net effect of these changes has been a reduction in speeds throughout the entire length of the scheme, and a safer and calmer environment that ensures inclusivity for all the community, including the elderly, the mobility impaired and the socially disadvantaged.

Ensuring that the works were carried out in a manner that secured the health and safety of the public and construction workers added further complexity, particularly given the busy nature of the street and the requirement that all properties along the work area had to be kept open at all times. The design and construction teams were, however, uncompromising in implementing all the required health and safety protocols, and a construction programme, phasing plan and traffic management plan were developed for the project. The contractor’s careful management of movements and access along a busy town centre street supported the safe and effective completion of the project.

Learn more about our urban roads and streets work